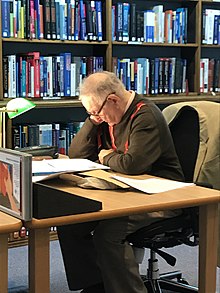 Gelbier in the Royal Society of Medicine library, 2017.

Stanley Gelbier (born November 1935) is emeritus professor of dental public health and honorary professor of the history of dentistry at King's College London. He is a past president of the History of Medicine Society, and the former curator of the British Dental Association's museum.

Stanley Gelbier was born in November 1935 at Clapton Common, Hackney, London.[1] He is Jewish and experienced antisemitism in his youth after the end of the Second World War.[2] He received his dental training at the Royal Dental Hospital (1957-61).[3]

Gelbier was professor and head of the department of dental public health at King's College London from 1990 to 2002. He is now professor emeritus there. Since 2010 he has been honorary professor in the history of dentistry at King's. He is a past president of the History of Medicine Society, and the former curator of the British Dental Association's museum.[4]

Gelbier was appointed assistant curator of the British Dental Association Museum in 1982[5] and full curator in 1987. He became the first U.K. honorary professor in the history of dentistry. His research has ranged from care of pauper children to the lives and work of leading dentists. His historical writings have covered the British Paedodontic Society, the International Association of Dentistry for Children and the British Society of Oral Health and Disability.[6]

In 2002, Gelbier was awarded the BDA's John Tomes Medal, which honours members of the dental profession and of scientific importance.[7] The BDA later honoured Gelbier with life membership in December 2007.[8] In 2016, Gelbier was presented with the American Academy of the History of Dentistry's Hayden Harris Award by Dr Sheldon Peck.[9]

Gelbier organised the Witness Seminars on the history of dentistry at the BDA as part of the John McLean Archive of Living Dental History, funded by a bequest from the estate of dental pioneer John Walford McLean. Gelbier is the joint editor with Nairn Wilson of the transcripts of all five of the seminars which were published by the BDA in 2014.[10]

In 2015, Gelbier retired after 33 years as deputy and then honorary curator of the British Dental Association Museum.[4] In 2017 he published his autobiography, From Public Health Dentist to Dental Historian.

All BDA, London, 2014. Edited by Stanley Gelbier and Nairn Wilson.