Most who undergo mastectomy lose feeling in their chests, but microsurgeons can now restore sensation by connecting nerves during tissue-based reconstruction.

Surgeons discussing reconstruction after mastectomy usually focus on the size and shape of the new breast and how to make something that looks as normal as possible. But what about making something that feels like it did before, and not just on the outside?

Almost all women who have a mastectomy lose sensation in their chest, many of them forever. Dr. Constance Chen, a New York City-based plastic and reconstructive microsurgeon who specializes in breast and body work, says it’s time for this to change.

“Traditionally, the goal was to make someone look OK in clothes,” Chen says. “In other words, to create breast mounds so that a woman didn’t have to stuff her bra. But surgeons who do more advanced breast reconstruction want your breasts to be indistinguishable in appearance from normal breasts. In other words, you’re naked, and nobody knows that you’ve had a mastectomy and breast reconstruction. The next step is to make breasts that feel like breasts to the person who’s had the mastectomy.”

This is important not only because every woman deserves breasts that look and feel natural but also because the loss of protective sensations can be harmful. According to Dr. Dung Nguyen, director of breast reconstruction and adult plastic and reconstructive surgery at Stanford Health Care, numbness is a major complaint among the center’s mastectomy patients. “Patients often tell me that they unknowingly bump their chest against objects while working because of a lack of proprioception (ability to sense objects in space),” Nguyen says. “There are patients whose skin has been burned while ironing clothes because they couldn’t feel the heat of the iron.”

The loss of sensation can cause emotional pain, too. Jane Obadia, who had a mastectomy and implant reconstruction when she was 43, experienced that when she was unable to feel her newborn daughter on her chest. 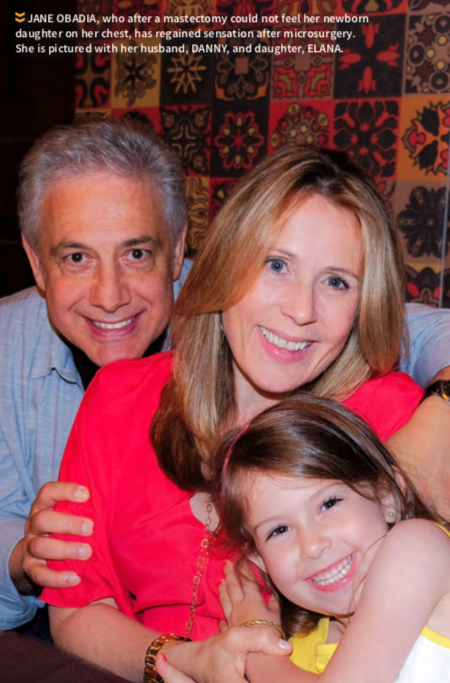 “We were in the delivery room for her birth,” Obadia, whose daughter was born via surrogate, says. “And the head nurse said, ‘OK, clothes off, we do skin on skin here.’ And I sort of looked at her and I was like, ‘But I’m not going to feel her. I can’t feel anything in my chest.’ And she said, ‘No, but she’ll feel you, Janey.’ And I remember sitting in the chair, and if I hadn’t looked down, I wouldn’t have known that she was there. I was looking at her, thinking, ‘I hope I’m enough for you in this moment.’ I felt detached from one of the most precious moments in my life.”

But Obadia was lucky. Five and a half years later, Chen performed a PAP flap procedure (named for the profunda artery perforator, a blood vessel that is relocated during the operation) using tissue from Obadia’s upper thigh and lower buttocks to build new breasts. Now, two years after her tissue-based reconstruction, Obadia has near-normal feeling in her chest.

To restore sensation, Chen employed a technique called microsurgical neurorrhaphy, or micro-neurorrhaphy, which isn’t as futuristic as it sounds.

TOUCHING A NERVE
Whether the procedure is called resensation, reinnervation or nerve coaptation, micro-neurorrhaphy is being used by a handful of U.S. surgeons to reconnect nerves and restore feeling to reconstructed breasts.

Nguyen, a microsurgeon, works with the breast surgeon during the mastectomy. “We dissect out the individual nerves, as many as we can, as they come off the chest wall,” she says. “It’s the same way we do fine dissection during microsurgery.”

The process yields one to five nerves that are 4 to 11 centimeters long. If the patient is having a nipple-sparing surgery, which is ideal, the nerves are reattached to the nerve endings behind the nipple and/or the skin to bring sensation to the breast and nipple. If the patient has tissue-based reconstruction, the nerves can also be connected to the sensory nerves from the flap for more sensation.

Dr. Joshua Fosnot, assistant professor of surgery and program director of plastic surgery residency at Penn Medicine, finds two previously cut nerves on the chest wall, removes one to use as a free nerve graft, and connects it to the end of the other nerve and the transplanted tissue.

For the past three years, Chen has been using nerve grafts processed from cadavers, which are sterile and can be frozen for up to three years.

Chen, who consults for Axogen, the company that sells the grafts, harvests the patient’s tissue to be transplanted and finds the blood vessels and nerves to create a breast flap. Then she uses a thawed graft to connect the nerve from the flap to the recipient nerve in the chest wall. Prior to using this technique, Chen connected a nerve from the flap directly to one in the chest wall. Chen says she prefers using a graft because it causes less damage to the patient’s tissue and shortens the operation.

“The nerve graft is like an extension cord to provide sensation to the new breast,” Chen says. “It connects the tissue, wherever it comes from — usually, the lower abdomen — to the nerve that used to innervate the breast.”

A double-flap tissue reconstruction usually lasts six to eight hours. Then, each of the four required nerve connections takes 15 minutes, which adds up to two hours for a bilateral procedure.

Although Fosnot believes that cadaver-generated grafts can be helpful for patients whose nerves are not available for use, he says any surgeon doing this type of tissue-based reconstruction is already trained in microsurgery and often can dissect out and connect the nerves without using the graft. With his method, nerve coaptation adds just 15 to 30 minutes to the procedure.

It is not yet clear whether sensation is restored more completely with one technique versus the other.

THE IMPACT OF IMPLANTS
In January, the American Society of Plastic Surgeons reported that 80% of patients who have reconstruction choose implants over tissue-based procedures. However, recent implant recalls and links to a rare form of lymphoma and an autoimmune syndrome may be shifting that statistic. Nguyen estimates that 50% of her patients have implant reconstruction, about 40% have flap surgery and about 10% have another form of reconstruction.

Not all patients are candidates for tissue reconstruction. According to Chen, it isn’t advised for patients who are too sick to undergo the surgery or those who use nicotine, which causes clotting and vasoconstriction and impedes oxygen delivery to the tissues; this can lead to flap failure. If a woman chooses implants, can she still regain sensation? “It’s more challenging, because you’ve put the implant between the nerves and the breast skin,” Fosnot says. “They may get some creeping sensation from the periphery, but it’s very unlikely that anything is going to change significantly with time.”

HOW WELL DOES IT WORK?
Measuring sensation can be tricky. Nguyen’s team uses Semmes-Weinstein monofilament testing. Traditionally used to screen for loss of protective sensation in patients with diabetes, it measures touch and pressure with single nylon fibers of varying size. The team also tests for temperature, vibration and proprioception.

Because sensitivity is relative, patients can have different starting points. “The range of response is variable,” Nguyen says. “In women who have massive weight loss and have large and (drooping) breasts, for example, their nerves can be stretched, and they may not have as fine of a sensation to touch as women who have smaller breasts. That’s not absolutely true in all cases, but it is an observation.”

Some patients become overly sensitive. Fosnot cautions that anytime nerve endings are cut, the patient could end up hypersensitive to touch — a side effect of mastectomy in general.

All these factors make measuring improvement outcomes tricky, and many doctors are still in the process of collecting data.

Fosnot co-authored a paper based on results showing that nerve coaptation after mastectomy significantly improved breast mound sensation above mastectomy alone, implant reconstruction and tissue reconstruction without coaptation. Pulled from multiple studies, the data reflected measurements of sensitivity to touch, the ability to discern that touch is coming from two distinct places rather than one, heat and vibration. 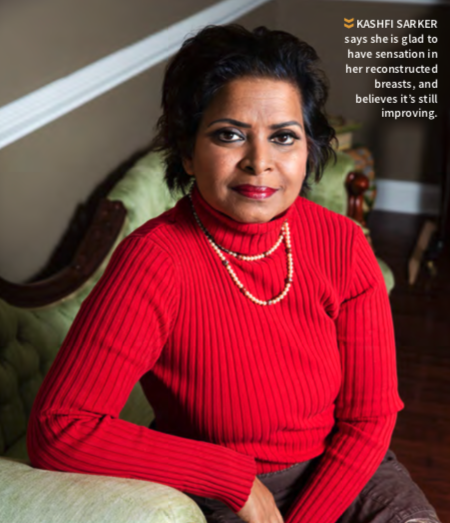 Three of Nguyen’s 10 patients who are furthest out from surgery now have near-normal results. “They’re ticklish when you touch their nipples, which is a sign that the patient is regaining true normal sensation,” she says. “That’s very exciting.”

Many individual patients also have reported promising outcomes, such as Kashfi Sarker, 53, who had a bilateral mastectomy after her stage 3 breast cancer diagnosis in 2015. Sarker couldn’t have skin- or nipple-sparing surgery because cancer cells were found in her skin. However, in September 2016, she had a DIEP flap reconstruction (named for the deep inferior epigastric perforator blood vessels relocated during the surgery), in which Chen used abdominal tissue to form new breasts.

“I had particularly sensitive nipples before, so the sensation is not the same,” Sarker says. “But the amazing thing is that the sensation is there now with the nerve grafting. Nerves grow very slowly — I think I read that they grow a millimeter a day. And now I can feel my own hand and the temperature of it (on my breast).”

Obadia, who is a patient spokesperson for Axogen, says she has regained 80% of her original sensation, including erogenous function. “It took a while for the skin sensation to come back, but you can feel the lower levels start early on,” she says.

SPREADING THE WORD
So, why aren’t more surgeons doing this kind of nerve reconstruction? According to Chen, most micro-surgeons don’t even perform perforated flap breast reconstruction, and nerve repair is a step beyond this. Plus, these surgeries are long and complex, and surgeons are under increasing pressure from hospital administrators to minimize their operative time, she says.

Nguyen says she and her colleagues at Stanford present at conferences, write papers and train fellows and visiting doctors: “We want to share this innovative approach and our experience with the rest of the medical community so we can continue to advance the field.”

Chen is part of a group of microsurgeons from around the world who are interested in innovations in breast reconstruction and meet in person every other year.

According to Fosnot, the technique involved in putting a nerve together isn’t complicated for a trained microsurgeon. “Companies like Axogen drive training because they want people to use their product,” he says. “But the reality is, the techniques involved in putting a nerve together are techniques that any microsurgeon has already learned. It’s nothing complicated.”

Furthermore, Fosnot says, although insurance usually covers the procedure, each Axogen graft costs between $2,000 and $5,000, an add-on that becomes a cost the hospital has to pay.

Patients in search of a surgeon who can do a nerve repair can go to the American Society of Plastic Surgeons website and use the Plastic Surgeon Match feature to first locate a doctor trained in tissue-based reconstruction, then contact the surgeon’s office to ask about nerve repair. Axogen also offers an online surgeon locator.

One thing these doctors can agree on is that nipple-sparing mastectomies should be the standard, not the exception. Many patients undergoing mastectomy — unless they have nipple discharge or large tumors right under the nipple — are eligible for this type of surgery.

“The gold standard in breast reconstruction is a nipple-sparing mastectomy with a natural tissue breast reconstruction and nerve repair,” Chen says. “Every woman should have the opportunity to walk out the door and feel like she can move on with her life after breast cancer and know that her friends, lovers and doctors may not even be able to tell that she’s had a mastectomy.”